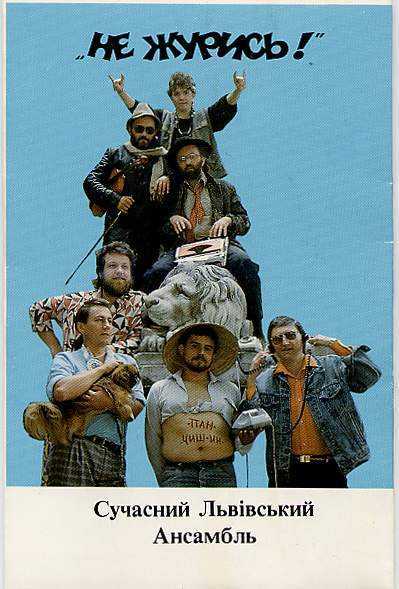 The Lviv variety theatre "Ne Zhurys'!"(Don't Worry!) was formed in June of 1988. Its' popularity peaked between 1988 and 1991 when it staged a whole series of musical-theatre productions that sharply criticized and mocked the current communist regime. The group performed songs that were banned during Soviet times (songs of the Sich Riflemen, UPA, political dissidents) and, on October 5, 1989 in the Lviv Philharmonic Hall, was the first to publicly perform the still banned Ukrainian national anthem "Sche ne vmerla Ukraina" (Ukraine has not died yet).

The most well-known productions of the theatre included "Vid vukha do vukha" (From ear to ear) (1989), "Vertep" (Christmas Pageant), "I mertvym, I zhyvym, I nenarodzhenym" (To the dead, the living, and the unborn), "Kartoteka Pana Bazia" (Mr. Bazio's Files), "Poviav Viter Stepovij" (The Steppe Wind Blew) (1989), "Pisni z-za Grat" (Songs from Behind Bars) (1990), "Zolota Lykhomanka" (Gold Fever) (1992). The soundtracks from these productions were recorded in Lviv's "Studia Leva" and were produced on cassettes in Ukraine and Canada by "Kobza International". Songs made popular by the theatre also served as a basis for several musical television films - "Ne Zhurys'!" (Kyiv, 1989), "Os' taka istoriya" (Such a history) (Lviv, 1989) - and many humorous television shows.